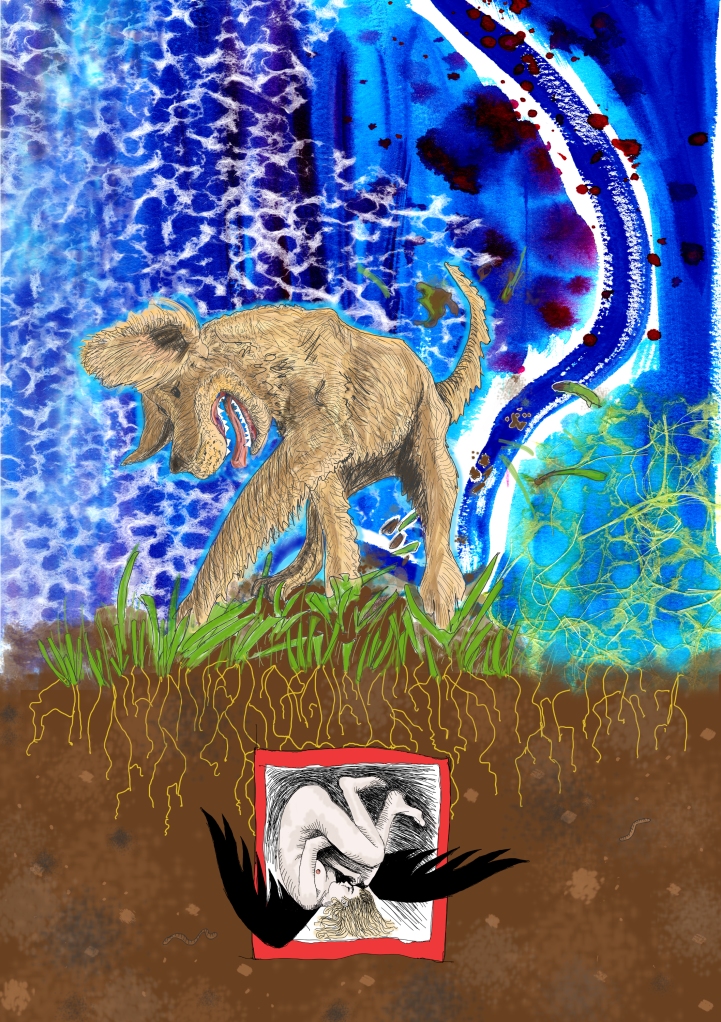 Its bones and feathers are flattened here, exactly how a bird looks, but like it’s been hidden between the pages of a dictionary for a week.

My brothers, in aftershave, mullets, and pimples, come down the hill in our yard, one carrying a shovel.

I am six, and the youngest, kneeling by the bird—the first dead thing larger than a potato bug I’ve seen up close.  It’s the closest I’ve been to any bird.  Usually, seeing a bird’s wings flap hard against the air made it seem as though I was chasing them.

A dashed line of one-hundred-year old maples border the chain-link fence around us.

My brother Darrin digs the hole.  Our dog, Coty, drags her chain through the chalky dirt after a squirrel, but leashed to her doghouse, she rears back.

A week from now, Coty will chase a squirrel across the backyard, and I, clinging to her leash, will scrape a grass stain down my stomach behind her.  While I struggle up, she’ll escape through the gate and neighbors’ gardens with her leash, an extra tail.  When my family asks why I didn’t let go of her leash, I won’t know.

My brother Jamie places the bird in the box, on top of carnations of toilet paper.

Darrin throws down the shovel and lights a cigarette.

They’re all distracted with the sex and secrets of their lives.  Years later, I will smoke my first cigarette behind a gravestone in the High Street Cemetery with a friend I treat like a sibling, but won’t know past age twelve.

I place a LeFleur perfume sample card on the bird.

We all grab hands as though we will dance “Ring Around the Rosie,” but stand still instead.

Another day, before the summer is over, Coty will sprint after the neighbor’s cat.  I will let go of her leash, but still follow her unwieldy path.  A teenage driver will hear me call her name, so he’ll yell, “Coty!” from his car window, and when she advances, he’ll slam on the gas.

I will scream, “Asshole!” and, like any adult, give him the finger.  I’ll already be a speck in his rearview.

The more you call Coty, the faster she’ll run.

After I return home empty-handed, I admit to my mother every cuss word I’ve ever said.

I am the only one who stares at the bird, nestled safely.

“I hope Coty won’t dig the bird up,” Micheil says.  And, Coty will, in fact, this autumn.

While saying a prayer, they pause to keep from laughing.  Unsure if I should look to heaven or bow my head like my sister, I stare at the horizon of shingled roofs on our block.  Our truths are all different.

Jamie sings, “Take these broken wings, and learn to fly again, learn to live so free.”

Darrin and Micheil howl and snort until they’re crying, too.  The maple leaves shake in apology, or to keep the beat, and I can’t tell which.

They will go places tonight that I won’t see for a decade.

I bulldoze the dirt and grass over the bird’s box.  After, my nails are brown slivers.  I string an inch-thick of hair to my mouth, while I tiptoe around the yard, picking dandelions.

I drop the weeds to the dark circle of dirt, and when I turn around, my siblings are gone.

Sarah Cedeño’s work has appeared in Bellevue Literary Review, Redactions Journal of Prose and Poetics, Literary Mama, and in the anthology Love Rise Up by Benu Press.  Her fiction has been nominated for the 2012 Pushcart Prize.  She lives in Brockport with her husband and two sons. She teaches creative writing at SUNY-Brockport and is an MFA candidate at Goddard College in Vermont.