From the band Brutal Truth’s cover art from their album, Sounds of the Animal Kingdom. For more information, visit https://www.facebook.com/brutaltruth

The Brief and Sad Life of Bongo

The Son couldn’t talk to his parents about anything. Not his ex-lovers, not his ambition, not his tremulous fear of never progressing in what he vaguely believed to be his life. Instead, he spoke through a stuffed ape named Bongo.

The Son snatched the animal from the rambling zoo that Mother had created in the living room with all her stuffed Beanie Buddies (including Bongo), her porcelain Holstein cows, her patchwork pigs. They clung to the shelves of the mirrored cabinets. They huddled together in the toy wagons that Mother used to keep them off the newly installed hardwood floor.

Bongo had shaggy black plush as well as a face and belly of close-cropped gray plush. She was about the size of a football. She had small, hard black eyes over which two immense gray eyebrows rested. She looked pitiable, sad and forlorn, forgotten in the chaos of obnoxiously cute creatures. The Son knew he had to rescue Bongo and give her voice.

The Son worked for Mother in a dark-paneled office attached to the back of the kitchen. Father had a computer, and Mother had a computer, and The Son had a computer, but a much smaller one. Every weekday, he arrived at their house, poured a soda, kicked off his shoes and typed the dreary, occasionally incoherent notes dictated by the doctors. He did enjoy, in a small and shameful way, hearing about the ailments and desperation that passed through each doctor’s door and found their way onto a microcassette every morning for pick-up. Perhaps it was this steady stream of complaints that helped give voice to Bongo. The Son was not sure.

Bongo’s first word was innocuous enough. The Son crept up on his mother as she typed still more doctors’ notes and held Bongo so it appeared the ape was seated on the arm of her chair. He tilted Bongo’s head back in a pose of anticipation. Mother, oblivious, kept typing, so the Son lowered his voice (how strange! since he imagined Bongo as a girl!) and muttered, “Hello.”

Mother kept typing. She swore under her breath as she failed again and again to delete an error in the note she was working on. The Son spoke again: “Hello.” Then Mother stopped typing and lifted her chin as if the noise came from above. “Hello,” the Son said, moving Bongo’s head slowly up and down, “my name is Bongo.”

Mother looked down with a start. Her face then took on a puzzled expression. “What is she doing out of her cage?” Mother kept Bongo, along with two other plush monkeys, in a toy-sized red wagon by a stereo speaker. This was the “cage.” The sudden genesis of a personality for Bongo made a precise sense to the Son, since Mother had already fashioned homes and loose families for her animals.

The Mother’s voice was edged with mischief: “What is Bongo doing out of her cage?”

The Son pressed his middle finger, causing Bongo’s head to nod in a pose of remorse. “I’m lonely,” the Son said. “Nobody comes to visit me.”

“I see her all the time,” Mother replied, addressing the Son. She had not yet acclimated to speaking directly to Bongo.

Mother was getting into the swing of the charade. “I’m too busy to learn everyone’s name. I’m sure she was perfectly happy until you came along,” she said, still addressing the Son and not Bongo.

“What’s my name?” the Son pleaded, his voice low and dusky.

On each Beanie Baby, there was a tag attached on its ear that revealed the animal’s name along with some dopey little poem. Mother reached for the tag. The Son yanked back Bongo from the chair’s arm.

“How am I supposed to know her name if you won’t let me see it?”

The Son, still using his Bongo voice, unspooled an elaborate guessing game that Mother failed completely, even after generous clues supplied by her son.

Finally, he said, “Bongo. My name is Bongo, and I want a banana.”

“We don’t have any bananas,” Mother said.

“You’re my owner,” the Son said, “you’re supposed to have bananas.”

“I guess you ate them all,” Mother shrugged, smiled at her son and returned to her typing. It was the longest conversation Mother and the Son had all day.

The patients kept coming and the doctors kept dictating. So much sickness in the world, we’ll never be out of work. The Son cannot remember if Mother or Father said that. Father is retired and sits at his computer all day playing solitaire and endlessly organizing his collection of downloaded music.

As the patients continued, the Son concocted more elaborate back story for the bereft Bongo. The stuffed ape, he decided, wanted to be a magazine model. He twisted Bongo’s limbs to mimic sultry poses like tan, pretty women stretched on their sides over the hoods of cars.

The family sometimes watched “America’s Next Top Model” after work on Wednesdays, and one evening during a commercial, the Son said, in his Bongo voice, “I’m going to be a model. Look at my pose.”

The Son was delighted to be handed such fertile material. “No,” he said, “I’m going to be America’s Next Top Monkey.”

Mother and Father laughed. Father asked, “So you’re going to take care of me in my old age?”

“As long as you find me bananas.” The Son pulsed the ape’s head up and down to mimic speaking.

Bongo’s modeling ambitions provided amusement for a week, perhaps two. But the Son grew restless. He felt himself the owner of the kind of talking doll that speaks when you pull a string in its back; he had already exhausted every possible utterance from Bongo. But then, while typing about a morbidly obese patient whose entire circulatory system was on the brink of blackout, an idea occurred to him.

“Mother,” he said, in the Bongo voice. He held the ape by its back so it appeared to be standing.

“What?” she asked and turned around in her chair.

The Son moved the ape’s paw over her belly. “My stomach hurts.”

“Well,” Mother said, “that’s what you get from eating so many bananas.”

Keeping Bongo’s paw over her belly, the Son continued. “I need affection.”

“I’m busy right now. You’ll just have to affect yourself.”

“But my stomach hurts.”

“Guess you won’t be posing tonight then,” Father said, eyes never leaving his computer monitor. The Son wondered if Bongo, were she real, would recognize Father’s face, or just the back of his head.

The stomachache persisted as did Mother’s blithe denials or dismissals of the ailment. The Son moaned in his low, pitiful Bongo voice about his stomach, his yearning for bananas. Mother shook her head, sometimes laughed, swatting her hand behind her shoulder.

After watching a “Dateline” special about a decade-old baby switch in a hospital nursery, a notion struck the Son for the next phase in Bongo’s short, strange life. “Mother,” said the Son one day, holding Bongo, “my stomach hurts.”

The Son took a pause for dramatic effect, then growled, “I’m pregnant.”

Mother burst with laughter. She truly did find her son amusing and bizarre. “What do you mean, you’re pregnant?”

“One of your cows took advantage of me.”

“That’s nonsense. My cows are pristine and well-behaved.”

“I’m not the one who misbehaved.”

“Who’s going to take care of my baby ape?”

“Looks like you’ll have to go on food stamps.” Father grunted. The computer had beaten him again.

The Son returned in the evenings to his apartment in the city. Mother and Father fixed dinner, complained about the difficulties they faced, the cosmic injustice of this life and perhaps all lives. Occasionally, Mother remembered to return Bongo to her red wagon but more often, the ape remained cast off and forlorn wherever the Son had left her that day: his computer desk, the sofa, the kitchen table.

One night, after Mother had gone to bed and Father followed later, after David Letterman, there was a startling noise in the house, a thump perhaps, or a dull thud. Father believed that men should investigate such things and left Mother in bed to creep into the living room. He flipped on the light and saw nothing unusual, just shelf after shelf and cluster after cluster of stuffed and porcelain animals, all staring at him with their small hard eyes.

“Daddy, get in here quick!” Mother cried from their bedroom. Father lumbered back down the hall as fast as his age would allow and rushed into the bedroom. Mother sat stiff in bed, her covers clutched to her chest. Father was speechless. Wasn’t he gone for the night? How did he get into their bedroom, which they kept locked when he was there working?

The Son stood before his parents’ bed, holding Bongo up in his hand. But he did not speak in that low, sad voice of the ape. He spoke in his own. “Why don’t you love me?” he asked. “Where are my bananas?” 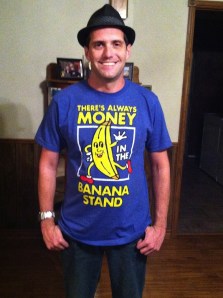 Thomas Kearnes is a 37-year-old author originally from East Texas and now living near Houston. His fiction has appeared in Storyglossia, PANK, Word Riot, Eclectica, Digital Americana, and dozens of other publications. His first fiction anthology, “Pretend I’m Not Here,” is available from Musa Publishing, and his second collection, “Promiscuous,” is available from JMS Books. He is studying to become a licensed chemical dependency counselor.

One Response to “Story”