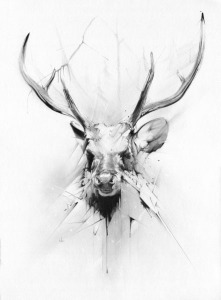 The Stag by Alexis Marcou; for more information, visit
http://www.alexismarcou.com/

Sometimes when Maria imagines Travis—as her mom reacts over the phone about their plans to move in together, or as Maria tells one of his jokes to her coworkers, or as she sprays the perfume he bought her along the delicate bones of her clavicle, her wrist, just below her ear—she sees him the way he looked the night they met at a mutual friend’s dinner party: his plaid shirt tucked into his jeans as he pawed softly at the carpet with his boot, watching the fibers bend and flex as he spoke about how different the East Coast was from the Midwest, then later with his head tipped up toward the clouds covering the moon as they drank on the back porch and he chain-smoked, lighting each cigarette from the cherry of the one before it.

In her mind, as he stands washed in moonlight, colors begin changing and muting, clothes drop away or dissolve, maybe both—she’s never quite sure—disappear anyway, and she looks down to his narrow, hairy feet and wiry legs, eyes trailing up until she comes to the soft brown hair across his chest: the smooth, broad muscles of his shoulders and thighs tighten just like a buck in rut as he senses her looking at him, turns, and she sees that his ears have fanned, are sitting a bit more out and look almost pointed, between them eyes now wide and glossy, dark like a deep pool in cool wet forest, and crowning his head, emerging through that shaggy brown hair, two golden antlers sprawl, scattering the sterling light and completing his nude form in a way she’s never had the right words to describe: something like “a part of nature” or “a prince of wilderness,” but she’s always laughed at herself, once or twice out loud, as soon as those phrases came to mind.

When she sees him this way, it is always so fleeting she really doesn’t even consider it any other time. In her mind, he will spin around and disappear over the edge of the porch, drop to the ground like water falls and stream away from her the way she has seen prey do from the advantage of a hunting platform, cold metal resting against her cheek.

Austin Eichelberger happily teaches English and writing in New Mexico, though he’s begun falling in love with the whole Southwest. His fiction has appeared in Cease, Cows, Flash: The International Short-Short Story Magazine, Gone Lawn, Extract(s), Eclectic Flash, First Stop Fiction, and others. More of his writing lives at austineichelberger.wordpress.com.