My wife Bethany and I are invaders. I hope we are the sort that gets excused by the locals as benign or beneficial: honeybee, apple, the green crabs that haunt the tidepools. We hope to become the old sort that the islanders hardly remember a time without: periwinkle, brown rat, the reeds that rim the brackish ponds. For now, our luggage and leisure give us away.

Throughout my wife’s pregnancy, we referred to the thing inside her as The Squid. The nickname stuck. The Squid was on Block Island within a month of being born, and she spent her first summer being carried down its greenways, napping under an umbrella, and taking baths in an outdoor shower. We gathered beach peas, sea rocket, bladderwrack, Asian shore crabs, mussels, clams, and moon shells; fished for scup, striper, sea robin, and bluefish; speared triggerfish and tautog. I hope that some little bit of each made its way into the milk The Squid drank all summer long.

We jigged for squid in the island’s salt pond. The Squid was already asleep, her grandparents watching. We had a window of a few hours before she was likely to wake up for the first meal of the night. I preferred a spot in an elbow in a dock of one of the big marinas. At the turn a light hung over the water; if the squid were in, they would be there. Earlier that summer, on a night without any wind, the water there buzzed with pink crustaceans spinning in frantic circles. A few mallards skimmed them up from above, and from below waves of squid darted into the circle of light to snatch at them. But this night the wind was up, and the little chop made it difficult to see into the water anywhere but just below the light. No one was at the elbow, so we fished on either side of the piling where the light hung.

Jigging for squid is fairly simple in theory: Either toss the colorful jig with its ring of upward swept spines out a ways; or drop it straight in, then pop the lure up and down or let it sit and drift until a squid comes along and grabs hold with its tentacles. I always forgot what technique I used with the most success on the last trip.

Bethany caught most of the squid, and I lied and told her it was because I’d rigged her pole with the better jig. In an hour we had a couple dozen squid in the bucket so we left, happy to get to sleep a little earlier than planned.

When we got back to the house where we were living for the summer, she went in to brew tea and check on The Squid, and I set to work cleaning our catch. I cut the eyes away from the tentacles and the mantle; squeeze the tentacles to pop out the radula beak; pinch the wings together and pull them off along with the chromatophore laden skin; grab the hard, plasticky internal shell and pull it free, roll the squid inside out over my finger, like a condom, to expose the viscera. I pull the guts and gonads free; give the tentacles and intact, inside-out mantle a quick rinse with the hose; and insert them into a Ziplock. It’s an inky job, but the breeze kept the mosquitos away while I worked.

Bethany was feeding The Squid when I came inside. She was fussing because half her forehead was sunburned.

I fell asleep thinking of darker sort of invaders: knotweed, snakehead, purple loosestrife, the sort that fills one niche and then pushes on to the next, hungrily. We upset whole systems by striving to make new homes. The Squid is new enough that she might yet claim to be an endemic, here or someplace else where we take hold. 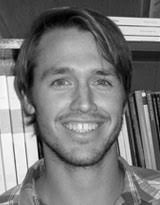 Mike Petrik spends his summers working with his wife, Bethany, and daughter, Willa, on Block Island, thirteen miles off the coast of Rhode Island. He is a PhD candidate at the University of Missouri where he works on The Missouri Review, and received his MFA from the University of Memphis. His work has appeared in places such as Broke Journal, The Journal, Pinball, Owen Wister Review, Fifth Wednesday Journal, and the Sierra Nevada Review.