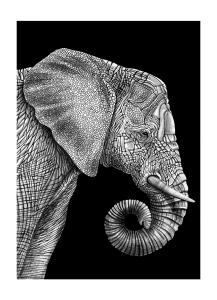 The path to that place is footsteps on bedrock. There was grass there once, when they first came; it has been that long, and the steady rhythm of eons of footsteps pressed rhythmically into the earth has worn away all that would give.

There is silence, also. The wind, what there is of it, serves only to amplify that silence. It blows through the bones that stretch like fingers toward the sky. It hums and moans through ribcages, runs the scales on femur and tibula, and the music is a form the silence takes. It carves fractal whorls on the mountains of ivory that litter the ground. If you must, imagine a piano in the distance, muted. Two fingers idly press the heavy white keys, melancholy—but that is a human thing. There is no sorrow here, only the weight of a terrible nostalgia. Were you to find your way here, you would also, perhaps, see a faint gray haze—but more on that later. For now, because humans need an emotional soundtrack, imagine the piano. Pretend this is a place that belongs to you, although it doesn’t.

It is not a matter of property, but of propriety. There is nothing we cannot know; but there are things we do not need to know. And these we chase endlessly. We collect data; the elephant can solve puzzles. The elephant can paint. The elephant recognizes itself in a mirror. The elephant mourns its dead.

They pause before the mountain that was a matriarch, her teeth a memory, hunger dooming her to slow decay. She fell before the water’s edge, unable to feed even on the soft lilies and floating greenery of the river.

The others cover her with leaves and dirt. They stand there three days, until they know she is gone. They cry, they shake, they stamp their feet. Perhaps it is anger, or grief. Whatever else it might be, it is foremost a message, propagating through the bedrock at the speed of sound. It says: come! Come and see!

They hear, for miles around. A vibration below the threshold of human perception, the elephants feel it through the soles of their feet. A type of music, perhaps. Made with flesh, and gravity, instead of the bone and skin and fiber of human music.

They hear. They come.

Humans have words, and numbers. We call it infrasound. We measure the numbers, calculate the frequency of the elephant wavelength. The elephants, for their part, have no need of instruments. They hear.

They come. They mourn. And then they move on.

When time has its way with them, they will return. Those who dwell in the quiet places have seen them, on this ancient ritual. Where time crashed a titan to its knees, they will pause to touch the bones, to pay their respects, to shudder into stillness near them.

That much is visible, subject to measurement; the rest is silence, to us, except perhaps (like a piano on the edge of hearing) something felt, an uncanny sense of being watched. Below the threshold of human hearing, we feel it instead: in the body, in the bones, driving some primal fear from before we had words. Also, the resonance frequency of the human eye occurs at this wavelength; the standing wave oscillates in the vitreous humor, causing hallucinations of greyish, floating shapes. At eighteen megahertz, we hallucinate ghosts.

That is one theory. Here’s another: the mind is an antenna. It receives ghosts. They exist at eighteen megahertz. And why not? We are social animals; we seek the company of others, perhaps in death as much as in life. The human recognizes itself in a mirror. The human mourns its dead.

Don Raymond lives in the tiny hamlet of Alturas, CA, where he works as an accountant at the local casino, which is not a career path his counselors ever mentioned to him. In keeping with the tradition that writers have weird jobs, he has previously been a lightbulb salesman and the manager of an Egyptian museum. He spends his free time writing, playing the harmonica, and mediating the Machiavellian feline politics of his household. He also once didn’t make a left turn at Albuquerque. You can read more of his work at Bourbon Penn, Everyday Fiction, and Architrave Press.