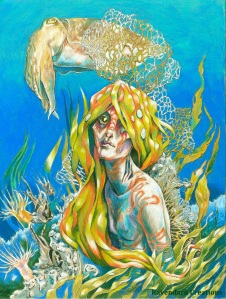 She catches the rebound and spins. Her long dark hair flies like a superhero’s cape around her shoulders. She refuses to tie it back. She has never allowed us to trim it, not even a quarter of an inch. She is hunched inside the extra large lion T-shirt she wears under the team uniform because the jersey gapes at the armholes, and she won’t wear a sports bra or tank top, like her teammates. She’d rather be a cuttlefish. Cuttlefish, she tells me, are cool, cooler than humans. Cuttlefish can change colors at will, and have eyes that rotate 360 degrees. Cuttlefish have no blind spots. No voracious predator, no hulking point guard, no unwanted physical manifestation of adolescence, could sneak up behind a cuttlefish in the final quarter, of the final game, of the final year of elementary school, when the hinky digital scoreboard that hangs high on the wall of the solar powered, green friendly, one hundred percent low-impact, “all-purpose” room that passes for the gymnasium at her school, reads 16 home—17 visitor, with twelve seconds to go and all the available air sucked up, and held in, by the parents, friends, and teachers, assembled on the inadequate assortment of folding chairs,  and de-commissioned stage sets, or those latecomers, some in obvious discomfort, sprawled on the floor. If she were a cuttlefish, she’d camouflage herself, change the color of her jersey, reverse the process of puberty with all its attendant miseries like incipient breasts, and underarm fuzz, and body odor, and girly girls in their short shorts, whispering inanities into every available ear, while texting inappropriate photos of themselves, chum for the hungry mouth of identity. If she were a cuttlefish, she’d spit a cloud of sepia ink, blotting out the whole sorry business, but she is just an 11-year-old sixth grader, cornered by the competition, so she passes the ball to the new girl, Alex, who takes it and runs, forgetting to dribble. The whistle blows.

I let go of my breath. I watch my girl out there, clocking her disappointment when she’s tagged by the sub, and then flings her gangling kiddo body onto the bench to sulk behind her hair. She’s spitting mad. I know this because she’s a sore loser, like me. Like me she feels it as a personal affront: “How dare they do this to me when I was doing my best out there?” Now I will have to do my best, for her, my best impersonation of a parent who’s happy they played a good game. A parent who hasn’t spent the last ten minutes dissecting the mother from the visiting team who keeps turning towards me with a chemical-bright smile every time our team allows another shot, and bats her eyes at a passel of boys in my daughter’s class, making a running commentary of her overawed reactions, giggling at them like she’s a schoolgirl and not a vacuum-packed, middle-aged, ding dong in skinny jeans and high-heeled sneakers, a full slap of makeup on at the end of the day, at the end of the game, at the end of the season for the San Fernando Valley Private School League. She clicks like a fucking Laker Girl, and I’m digging deep in my reserve of universal love and goodwill to plaster a smile on my face, and refrain from kicking her off the stage where she’s perched herself, front and center, before the home team supporters.

I am worried about my girl. Worried about how depressed she will be in a few seconds, when the buzzer goes and the game is over and there’s nothing left ahead of her except Algebra, and me, and my brittle mood, on the long drive home through rush-hour traffic. I want to tell her how every game she plays pokes a hole in the terrible balloon, the parade float of perfection I was strapped to at birth. I want to explain how floating up high, looking down at the crowd, is not only scary, but so not fun. Playing is fun. It also sucks, but not as bad as floating. Floating is how you miss the good stuff, all the grimy details, the beautiful flaws in the way we keep trying to love each other. I want her to know, even though she doesn’t want to talk about the puberty debacle, and despite the fact that in the span of the past few months I’ve been demoted from the “one person allowed in the bathroom while she’s in the tub” to “just one of the other guys” behind a closed door, that I’m with her. I’m with her, in the game, on the court, down here on the ground, where she with her exquisite gravity, has put me. I want her to know that just because I tell her to wash her face so she won’t get pimples does not mean I expect her to compete in the Miss America pageant. I want her to know that I notice how she’s started brushing her hair before going to school, even if she still wears boys clothes, and has farting contests with her buddies, and her fingernails are an extreme health hazard. I notice the way she lies on her bed, staring at the wall, when she should be getting dressed, and packing her schoolbag, and eating her peanut butter toast. I notice. I notice how she hates me to notice. If I could get her attention without pissing her off, I would remind her of another thing, something she taught me, about cuttlefish, how their vision is so cool, so advanced, so preternaturally awesome, they can observe the world around them while still in the egg, taking it all in, surveying the scene, considering their options, even before they’re ready to hatch.

Mia Sara was born and raised in New York City, and at the age of 15 began a career as an actress. Her acting credits include Legend, Ferris Beuhler’s Day Off, Time Cop, Queenie, A Stranger Among Us, Jack and the Beanstalk: The Real Story, and many others. After 25 years of night shoots, she remembered that she’d always wanted to be writer.

Mia Sara’s writing has appeared or is forthcoming in Chapparal, The Cossack Review, Edison Literary Review, Superstition Review, poemmemoirstory, The Southampton Review, The Write Room, Smartish Pace, PANK, Cultural Weekly, among others. The Dusie Press published her chapbook, “Still Life With Gorilla,” in 2014. Her column “Wrought and Found” ran for two years on the PANK blog, and is now a regular contributor to the blog at Barrelhouse Magazine. She loves in Los Angeles with her husband and children.