I’m sitting on the back porch trying not to jump out of my new not-almost-married skin, talking to my father about anything but abuse. He knows about escapism. It used to be the hunting cabin; now, with his deteriorating health that makes his return as likely as my living alone in the woods, or doing childhood over again, it’s remembering the hunting cabin. I caught my first fish in the pond there, a foot-long rainbow trout, returned it, and a salamander he wouldn’t let me keep as a pet, and I now know he was being merciful, not mean, subjecting me to the 20-minute heartbreak instead of introducing me to death. He wouldn’t let me shoot, and we both now wish he would have. I met another little girl there, with her father, the men drinking, grilling, four-wheeling, the children mingling, someone’s girlfriend making us sandwiches. The girl was a year younger and asked me if I wore a bra, and I remember shushing her, embarrassed. Why do we withhold knowledge like it’s a loaded weapon? I was going to put the salamander in a shoebox with leaves, it would’ve been a lovely life, I thought, because I didn’t yet know what captivity felt like. A place my father loved—his first bow kill, his mudding tires, his venison chili in huge batches to feed his friends, somewhere he could take his little girl who wasn’t a little boy but would hook a worm and gather sticks to build a tepee fire—is a place I learned too-subtle lessons. When I was 8 hunting salamanders, he taught me what the smallest, most fragile creatures need to survive. When I was 33 being hunted, he taught me the same. I’m not ungrateful, but neither made my skin lizard-thick. 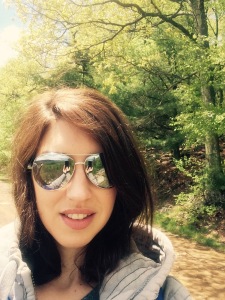