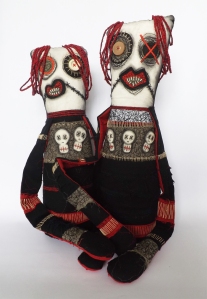 She softs her S’s and her makeup’s always perfect and when she opens her mouth you can see all the nothing inside. Ivanka’s got a Death Star heart and her Chanel bag and she takes them everywhere to show off so people know. They take pictures of her and talk about her body and how good she looks after making three kids. She swims in flashbulbs. She says thank you but what she really means is you’re fucking-a right. Her breath smells like coal and her hair’s a sheet of silky blonde piano wire and you never see her husband because you never need to. She keeps him in the basement, in an oversized sex cage, dosed with crystal meth and opiates and Cialis and hardcore pornography. Waiting for her to come and make him fuck another little demon burbler into her. His Wikipedia page says he’s a businessman and investor. He only has one eye from where she bit the other one out. She says she loves him. She thinks she means it.

Her spray tan looks natural. She gets her nails done every other day. There are thousands of pictures of her feet on the internet.  Her left big toe bends in a little bit and the nail’s still all wonky from when she hinged it all the way back and it fell off and turned black. She still remembers all the blood welling out of it and how it didn’t hurt at all but she cried when it happened anyway. She tells interviewers that no of course not she didn’t get a boob job because real women aren’t plastic and that question’s offensive. When one of her kids dies she stitches it back together with baling wire and makes it dance for company. Lindy Hop to the Chattanooga Choo Choo. Someone vomits and she puts it back in the box in the freezer. She writes op-ed pieces and talks to other writers and always smiles and hates her latest stepmother.

She never gets her period anymore, it’s just bats. Sometimes she goes walking in the woods just to smell the trees and feel the sun on the hollows of her pale, slender neck. Lotions her legs with shea butter naked in front of a full length mirror from Italy in the 1800s. She makes the other two kids tell the wiry little corpse puppet, I love you Joseph. She makes a voice for Joseph that’s like hers but higher pitched and tells them that it’s lonely in Hell.

She has a soy allergy and goes to see a Sammy Hagar concert alone in disguise. She sings along with Baby’s On Fire and smokes cigarettes all the way home. She tells everyone her dad’s gonna be President and when she fucks she fucks with knives and little round burns from her bad habit. She’s on the cover of Shape and Bazaar and Town & Country and Redbook twice.  She’s never afraid of anything and you’re never going to know her no matter how many times she tells you otherwise. She smells like fresh daffodils and vanilla and one time she stuck Marla in the kidney with a meat thermometer and wouldn’t take it out until it got to 98.6. Sometimes she sits alone and hates herself and that’s okay though because so does everybody else. There’s a purple fleece blanket she keeps in her bedside table that she calls Geegee and snuggles with when she’s sick or can’t sleep because of the dreams. She promises her dad she’s gonna grow up to be just like him. She knows promises can be broken and her dad does too.  He smiles like a dying reptile and sometimes talks too much about how sexy she is. His eyes feel bad against her body.

Matthew Lyons is a writer living in New York, paying the bills by working in corporate advertising, and will continue to do so until it drains him dry. He’s probably taller than you, not that it’s a competition or anything. His work frequently appears magneted to the front of the fridge, rendered in dry macaroni and glitter glue, whether his wife wants it to or not. Complaints can be filed at twitter.com/reverendlyons.