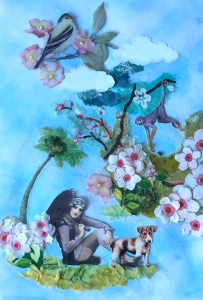 Fable of a Houseplant

One afternoon, as Caroline was watering the spider plant, she noticed that one of its plantlets was of a strange shape. She prodded it. It unfurled: a tiny green monkey with leaves for limbs.

Caroline let the monkey ride on her shoulder while she did the rest of her chores, save scrubbing the dog, which upset the monkey considerably. The monkey was dozing in the curve of her clavicle when Roy came home.

“Oh no, you don’t,” said Roy, and Caroline carried the monkey back to the parent plant, lifting it the to the stolon from which she’d plucked it. In its sleep, the monkey reached with all four limbs and wrapped around the stolon, chittering like a lizard.

The next morning, after bringing the children to school, Caroline sat sipping coffee and reading the lengthy to-do list Roy had left her. The monkey lugged an airplane bottle of rum across the kitchen table.

“Where on earth did you get that, you clever monkey?” asked Caroline, but the little green monkey said nothing, just winked one peridot eye at her.

Caroline cleaned the tissues from the front pocket of her purse and dropped the monkey inside of it, along with a baby carrot and one grape. They went shopping. The monkey helped Caroline choose a new dress, a paisley wrap, and a pair of purple pumps to match. Caroline wore her new outfit out of the store. Then they went into a jewelry boutique. While Caroline chatted with the clerk, the monkey slipped into a case and stacked several rings on its leaflet tail, with emeralds and sapphires as big as the monkey’s head. The clerk saw the rings were missing just as Caroline walked out the door.

One of the two mall cops who arrested Caroline was stout and mohawked, the other scrawny, with a sparse goatee. Both smelled of meat lasagna. In the dark of the security office, the monkey climbed out of Caroline’s purse and untied the single knot keeping Caroline’s wrap closed, and Caroline got the idea. Afterward, she helped the cops put their shared desk to rights and shook both of their hands before walking out of the office to her car.

“You naughty monkey,” said Caroline, and the monkey gently gummed the second joint of her pinky.

Caroline got home to find her mother-in-law’s car parked in the driveway, her mother-in-law sitting in Roy’s office among Roy’s hunting trophies. They busted the wax cap on Roy’s Christmas bourbon and toasted each other over a stuffed fox. The monkey mounted the mantel and scratched, hissing, a pronghorn’s golden glass eye.

“My son has never really cared for you,” said Caroline’s mother-in-law.

“That’s neither here nor there,” said Caroline. “Why don’t you just die already?”

Caroline’s mother-in-law was passed out naked in Roy’s Lay-Z-Boy by the time that Roy came home from work. Caroline had doodled all over the old lady’s face and body with a Magic Marker and was waiting for Roy on the kitchen counter with his antique Colt in one hand, Christmas bourbon in the other, the tiny green monkey tucked behind her ear.

“Where are the children, Caroline?” asked Roy.

“That does it,” said Roy. He grabbed the spider plant from its hook lickety-split and tipped it, soil and all, into the garbage disposal. The monkey screamed like a woman and launched itself clear to the sink, jumping down the hole after its parent plant. Roy turned on the faucet and flipped the switch. The disposal garbled to life, and in five seconds, it was running clean.

Caroline patiently explained all of this to her children as she tucked them that night so that they would understand why she was leaving. “And the moral of the story is, your father’s a murderer,” said Caroline. “Try not to let him shoot and stuff the two of you like he does everything else.” 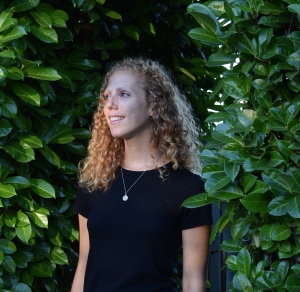 Gretchen Stiteler received her BA in Writing Seminars from Johns Hopkins University. She works as a freelance writer and editor, and splits her time between Seattle, Houston, and Philadelphia.