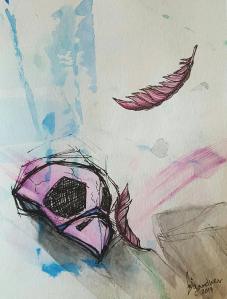 “I startled a weasel who startled me, and we exchanged a long glance.”

He was sprawled on my bed, laptop open on his stomach. I climbed in next to him and he opened his arm so I could lay my head on his chest.

“A poem about weasels,” he said. “It’s called ‘Living Like Weasels’ by Annie Dillard.”

“I wouldn’t call that a poem,” I said. “It’s more a creative nonfiction essay.” He ignored me.

He started reading, and I could hear the words as they amplified in his chest cavity. His heart beat under my ear, framed in the dark blue square tattooed on his chest, hidden under his clothes. It reminds him not to be square, he told me, and I traced it through his shirt as he read aloud. I’ve never been decisive enough for a tattoo, so his fascinates me. I tried to not look at the computer screen, but I cheated. I wanted to see the words, to savor them more fully. He read slowly, and I read along slowly too, not wanting to get ahead of his voice.

He read this line twice: “I think it would be well, and proper, and obedient, and pure, to grasp your one necessity and not let it go, to dangle from it limp wherever it takes you.”

The next line reads: “Then even death, where you’re going no matter how you live, cannot you part.”

He has death tattooed on the ring finger of his left hand, three black dots contained in a circle on the inside of his finger, where it’s mostly hidden. The alchemy symbol for death’s head, a skull, he told me as we were driving back from a weekend camping trip. He’s married to death, I thought, and looked out the car window while he told me about catching small mammals in live traps and how to age and sex them by looking at their pelvic bones.

He’s a taxidermist, and works in the museum at the university. This entails organizing freezers of dead animals, collected and forgotten over the years, waiting to be prepared and turned into preserved mounts. This work spills over into his rented apartment in town. In the bedroom, a row of jars hold beetles preserved in ethanol, black lozenges with spindly legs suspended in tea-colored liquid. A bowl of dried luna moths sits on top of the bookcase next to a dissection kit and three geodes. The shelves below are filled with volumes on natural history, astronomy, art, and poetry. A small glass and wood case holds a badger paw in the living room. In the freezer, a great horned owl is wrapped in two plastic shopping bags. Someone gave it to him a few months ago, after finding it in the road. It’s starting to get freezer burn, so he’s anxious to thaw it out and start preparing the skin. He has permits for these things, permits from the state to keep dead animals in his freezer, next to the bags of peas, old bananas, and ice cream.

We met doing field work, and I watched his hands as they deftly manipulated the tiny songbirds we caught. The tattoo on his finger flashed as he measured delicate bird wings and clamped metal bands around their legs. I caught a glimpse of two dots in a circle—what I thought, at first, might have been a smiley face. I couldn’t tell, after that first day, if he was the type of man who would have a smiley face tattooed on the inside of his finger.

He was one of the crew leaders, in charge of two other bird banders. I was a fill-in, there so another field technician could take an office day. I hadn’t banded birds regularly since last fall, a year ago, and it bothered me that I was rusty. I couldn’t accurately skull a bird in minutes, like the others could. It took me longer to see, and to make sense of what I was seeing. To age the birds, we’d part the feathers on their heads and look for what are called windows in their skulls, areas where the lower layer of bone has not yet fully ossified, or formed. Young birds will still have these windows; adults will not. It takes a fine eye, and the occasional help of a magnifying eyepiece, to look past the feathers and through the skin on the head of a tiny warbler, smaller in diameter than a quarter.

In order to collect accurate data, I asked for confirmation on almost all of my birds. No one said anything about my misidentifications, about my hesitation and uncertainty, but I judged myself silently. When I asked him about it later, he didn’t seem fazed by my ineptness.

I know, I thought, but I felt like I had to prove myself, and I failed. It’s hard to be inept at something you’d once been able to do without hesitation.

I’ve spent the last ten years studying and working with birds, so long that I feel completely out of my element when I talk about mammals. I don’t feel nervous when I handle songbirds, but something about the almost-familial-otherness of mammals makes me apprehensive. It doesn’t make sense. Mammals have eyes like mine, senses like mine, bones like mine. Is it that I don’t want to understand? Or that I’ve given up on understanding? There’s some safety in studying birds, in something so different from me.

It takes time to learn something in the feel of your fingers. After years of work and birds, my hands have memorized what to do: how to grip a bird wing with firm but gentle force; how to grasp their bodies securely between my fingers, holding the bird still but lose enough that it can still breathe; how to wield the pliers deftly with one hand to put a band around a bird leg.

Now, my hands have been learning the feel of hair instead of feathers.

We talk about chipmunk baculums sometimes. Penis bones. He lost one in the museum while he was working one day. Knocked accidentally off his dissection tray, it disappeared in the manner of all impossibly tiny things once dropped. He told me this while I was visiting him in the museum one afternoon and we both stared down at the industrial-colored tile, straining our eyes for a miniscule white bone among the tan and white swirled pattern of the floor. We quickly gave up, and he led me over to the back, to look at a cock-of-the-rock bird specimen he had discovered earlier while poking around the collection. After a quick look, he leaned me up against the metal cases filled with drawers of dead animals and kissed me.

Before I came over for dinner that first time, I went for a hike in the open space near his house. I’d been writing all day, working on an essay about blue jays and my grandfather’s death for my graduate thesis, and I needed to clear my head. He had biked to the grocery store and was waiting there at the trailhead when I got back to my car, just like I had been imagining. It was a few moments before twilight, my favorite time of day to hike. His face was in shadow, but I could see his smile when he looked up the trail and saw me coming.

“It’s nice having someone to miss, isn’t it?” said my roommate. 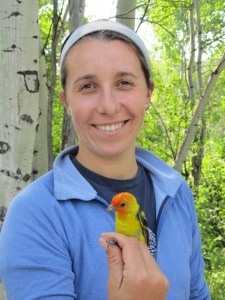 Lauren Smith is a recent graduate of the University of Montana, where she earned an MS in Environmental Studies with a focus in environmental writing. She is a science writer, a field biologist, and someone who spends a great deal of time thinking about birds. Her writing has appeared in Entropy, Bird’s Thumb, and Montana Woman Magazine, among others. She lives in Missoula, Montana where she spends as much time as possible outside, mainly climbing on rocks and telling her friends more than they wanted to know about bird biology.