I.
There once was an ice cream of sardines.
T’was packed with dried beans in wet cartons.
They tried to swim out, and squirmed all about
but couldn’t get out of the poutine.

II.
The cheese curds are coming to town! O!
The clown fish have gotten around! Ho!
Their outfits are trim, their bowties are prim
and carrots are fighting in Jell-O!

III.
There once was a mad hatter in butter
who seemed to have a mighty bad stutter.
He put a steak on the gr gr grill, walked up the hi, hi hill,
and bought Jill an amazing scooter.

IV.
Millions of hungry caviar
flee for their lives from the Scimitar.
One missed her date with a Head of State
and instead eloped with a Sausage Czar.

V.
A box-like pike named Psyche
rode her dirt bike to the rent strike-ee.
She put up her fist, cried, “Resist!” “Resist!”
and hitchhiked back to the Yucatan.

VI.
A blue-blooded fox named Cornelius
was going through a mental Ordealius.
He chopped up the onions, drank White Russians all luncheon,
and missed his train to the Turks and Cacaos

VII.
There was a swift camel named Yiorgos
who sported a gift for Clairvoyance.
He spotted the gin, then ran into Tim,
and now he’s fleeing the law in Barbados.

VIII.
There once was a flea named “Chrysanthemum”
who only ate lentils with cardamom.
She hopped off the gate, found her running mate
and now robs the Robins of Funds. Strum! Strum!

IX.
There once was a baby named “Chestnut”
who couldn’t stop downing the donuts.
He got so darned chubby, they needed a horse and buggy
to journey to pharaoh Imulet.

X.
A unicorn who loved high fashion
spent her days alone in a mansion.
Philosophy she read, always made her bed,
but never fulfilled her passion.

XI.
A satanic frog named Milton
bellowed from the top of the Hilton.
Room service he ordered: scrambled eggs drawn and quartered
and all-night crossword puzzles he filled in.

XII.
A mermaid named Phantasmagoria
lived her whole life in Astoria.
Her friend threw a bash, her tub was the trash
while the seashells discuss an Aporia.

XIII.
A melancholy dragon named “Flute”
set fire to an old-fashioned lute.
The owner collapsed, his memory lapsed,
so they dined on some dainties and fruit. 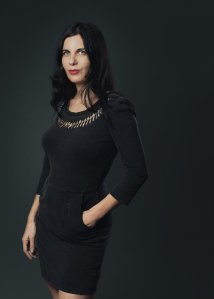 Sandra Simonds is the author of six books of poetry: Orlando, (Wave Books, forthcoming in 2018), Further Problems with Pleasure, winner of the 2015 Akron Poetry Prize and forthcoming from the University of Akron Press, Steal It Back (Saturnalia Books, 2015), The Sonnets (Bloof Books, 2014), Mother Was a Tragic Girl(Cleveland State University Poetry Center, 2012), and Warsaw Bikini (Bloof Books, 2009). Her poems have been included in the Best American Poetry 2015 and 2014 and have appeared in many literary journals, including Poetry, the American Poetry Review, the Chicago Review, Granta, Boston Review,  Ploughshares, Fence, Court Green, and Lana Turner. In 2013, she won a Readers’ Choice Award for her sonnet “Red Wand,” which was published on Poets.org, the Academy of American Poets website. She lives in Tallahassee, Florida and is an Associate professor of English and Humanities at Thomas University in Thomasville, Georgia.