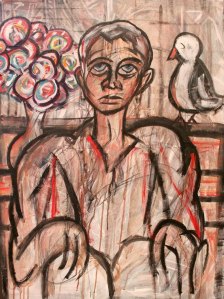 Portrait of a Seagull by Andrew Speed; for more information, visit
https://www.etsy.com/shop/AndrewSpeedArt

No Place to Land

Seagulls circled round. They smelled burnt hair. The faucet leaked, and the light bulbs fizzled out. Everyone evacuated when the storm wound in. A hot pink hot iron with strands of hair fused to the metal plates kissed the outlet, even though the electricity went out weeks ago.

While many families were able to get out safely, other families were unable to because of financial reasons. One family chose not to leave for no reason at all.

Marvin and Sheila Garrison resided right in the middle of the natural disaster. They lived on the 13th floor of a communal building. Many of their neighbors who were able to leave left and even those who were unable to leave without assistance were directed to shelters where they could reside until it was deemed safe to return home. Authorities insisted the couple leave and find safety. They tried to direct them to the elementary school gym three towns over, but Marvin didn’t believe in natural disasters.

The couple couldn’t go out, so they lived off canned foods and stale cupboard snacks. Marvin was displeased when Sheila couldn’t use the stove or oven to make his breakfast, lunch, or dinner because the gas had been shut off.

Marvin looked outside and grunted.

“And they wanted us to leave because of a little water?” He shook his head and went to the bedroom to take a nap.

Sheila sat on the floor in the living room with her back facing the black TV screen. It hadn’t turned on in days. TV was a constant in the Garrison household; it was on day and night with Marvin parked in front of it. The colors were always flashing and blurred. When the sun went down, it projected a blue tint in the one-bedroom apartment.

The voices that emitted from the television speakers were the only ones Sheila heard besides the inaudible conversations from outside and her husband’s voice, yelling at her to close the goddamn windows, make him food, or hand him the clicker.

Sheila loved having the windows open. She could hear people talk, and she could breathe. Their apartment was always humid and stuffy from a lack of airflow. Marvin didn’t like the windows open because sea air made him nauseous. More than once he caught his wife with her head out the window, but since the storm started, he forbid her to open them.

During the days while her husband slept, Sheila watched the gulls fly outside. They circled the elevated waters that waded past their windows. She placed a lounge chair towards the glass and applied coconut scented tanning oil as she watched them swing and swoop. They looked for a place to land.

She watched the birds pace. They flew back and forth and in circles. After watching them flap around aimlessly, she walked around the apartment going back and forth from the kitchen to the living room.

The birds cawed and squawked. One even flew into the glass. They continued to swarm and flutter through the air.

Sheila looked out the window. She missed the fresh air, breeze, and warmth of the sun’s rays. She stepped up to the window and glanced to the bedroom where Marvin was asleep. She ran her hands through her hair while she looked around the silent and stale apartment. Quietly, she pulled the window open and a swarm of seagulls flew in.

Ten or eleven flew around the apartment in search of food while Sheila looked outside without the obstruction of the dirty glass. The birds circled the apartment, tearing apart the furniture and shitting on the floors. Clumpy, white gunk soiled their black leather sofa and white and gray feathers painted their beige carpet. One gull ripped into the couch with its beak. The stuffing poured out from the tear.

Sheila stuck her arm out the window and pulled it back in. She felt the coolness graze her arm. Then she stuck her head out, breathed in, and started laughing.

Marvin stumbled out of the bedroom.

“What the hell is going on here, Sheila?” he asked, looking at all the seagulls in their apartment. Some flew, some walked, and others ate carpet and shat all over. He tucked his face into his inner elbow to ward off the scents of sea air and shit.

“Air,” Sheila said, laughing. “Look, Marvin, fresh air.” She stuck her arms and head back out the window. She leaned out to take it all in.

“Sheila, get back in here. What the hell are you doing?” Marvin looked around. “Get these birds out of here and close that goddamn window!”

Sheila stretched her torso; she was halfway out the window. She took a deep breath while Marvin ran in circles, trying to wrangle a bird. 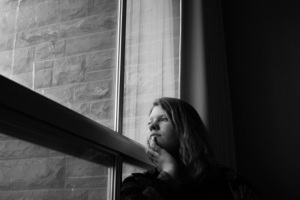 Lisa Booth is a writing major at Ithaca College. Her image text piece “Blue” placed 2nd in Ithaca College’s 2018 Writing Contest. She currently works as a writing tutor. When she’s not at school or writing, she can be found exploring Ithaca with friends or relaxing back home.