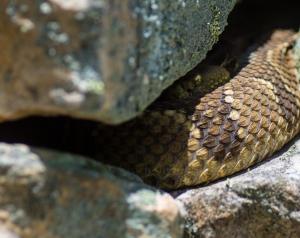 In the Rocks by Asia Murphy; for more information, visit
http://www.asiamurphy.com

The Exit is an Entrance

I trudged across the tanned hide of desert. Two hours ago I’d exited a technical slot canyon in a little-visited corner of Arches National Park. Thirty minutes ago, I’d drunk the last of my water. Now, I was maybe a mile from where I’d parked my car in a patch of bare sand surrounded by desert scrub plants. The earth was rusted over here, fractured rock like spider-work of sheet metal shimmers. The sun was so hot; its heat throbbed in my skin. the cracked land, parched mouth, grain-of-sand-suns, infinitude of nothing. Yucca spears, geometric Prickly Pear, tease of cool-mint Sage Brush, bleeding red Claret-Cup Cactus blooms. The desert was beautiful, but I barely noticed; I couldn’t drink it.

The canyon from which I’d just exited had been cool and shaded, a squeeze through darkened corridors of stone. Every canyon was one-of-a-kind, each uniquely sculpted by water and wind. They were secret places that the deserts held, spirited underground. Now back above ground, heat bent my back, the sand shifted under my boots making walking difficult, and I thought back on the cool stone of canyon. This desert plain was common, indistinguishable from the miles of desert plain I’d driven through to get here.

I knew I’d left skin cells on the sandstone, a shard of broken fingernail discarded into the sage, strands of hair wedged into a forked end of log jammed into the canyon bottom from which I had just come. Now back above ground, I could wear the brash flowers over my eyes, see nothing but barbed scarlet, and still I wouldn’t be this desert, could not be tempted to love the dry mouth of it, the rasp and rub of hot air like sandstone on my skin.

Suddenly a riotous buzz, like the crackle of a livewire. I ducked, thinking a giant insect had swooped low near my ear, before realizing what I was hearing.

“Snake!” I said aloud. The sound was coming from a mature sagebrush about six feet distant. I backed up a few paces. The buzz continued, loud, urgent, pervasive. I looked, squinted hard at the sage’s dark base, knowing to look for the coil among the flecking bark, perhaps the whir of rattle. I knew what I would see—copper or silver rectangles marching down the dorsal spine, the thick body of muscular, braided rope, short, no longer than two feet at most, but broad-backed. The rectangles might be clear stamps of charcoal, or they might be faded to dusty desert colors, just sketched outlines, if the snake was older, the markings of the Midget Faded Rattlesnake, the only species common in this area—but I didn’t see it.

The sound pulled me down deeper, much deeper than I had gone into the canyon, beneath the earth, through the ground-up bones of rocks and animals and people, and still I didn’t see the coiled body, the unfeeling eyes watching me. I only saw the depths of branch and mound of hunkered earth, and heard the terrible hum, heard it as the air went taut, as the sun chilled, and the day gaped, the desert opened, as if the roiling sound began inside my own head, and in the mouth of the unseen I could’ve sworn I heard my name. 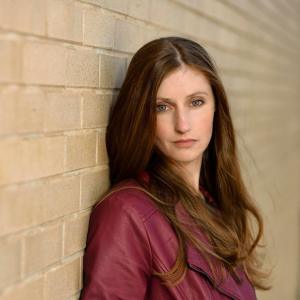 Rebecca Young’s essays have appeared or are forthcoming in Bird’s Thumb Review, Animal Literary Magazine, Two Hawks Quarterly, and others. She received her MFA in fiction and nonfiction with Vermont College of Fine Arts in 2019. She lives in the tiny mountain town of Leadville, Colorado, where she enjoys hiking, skiing, rock climbing, and mountaineering.