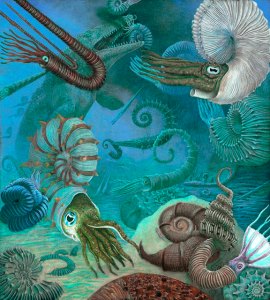 Deep in the Indices of Amun by Mike Menasco; for more information, visit
http://www.facebook.com/nativesandpaleobymenasco/

When Texas Was at the Bottom of the Sea

on top of it. The built house’s soil
homes pulverized shells resembling dirt.
Chance’s Prairie was built on old layers
of dried ocean, ancient reef, the site
of vanished life forms, built long
ago. When you stare into the void

of the ocean, you may only see the void.
If you dangle toes off Guadalupe Mt. soil,
you will be dangling off the edge of a long
range of fossils that may look like dirt.
Look closer and you will see a gravesite
of 400 miles of reef with species layered,

extinct in the rocks you dangle from. Layers
of acidic rain once danced to this void.
The temperature shot up; thousands of long
years brought death to the sunken soil.
Look out over Texas and you will see dirt
pump-jacked. Oil slurped from the long

necks of “nodding-donkeys”. The long
dead and dried Permian ground’s layers
are being sifted through like they are dirt.
This is when you learn you are the void
and this isn’t just dirt, or sand, or soil.
You are digging your towns on a birth site,

a death site, on a once was my home site.
The landscape filled with metal, long
stretches of land filled with cracked soil
exposing its graveyards, deeply layered
in Texas ground. You may only see the void
of the earth’s crust, of all of the dirt,

of all of the soil layers exposed, but deep
in the belly of the site, the mountain’s long
tongue in the dirt whispers to the ocean’s void. 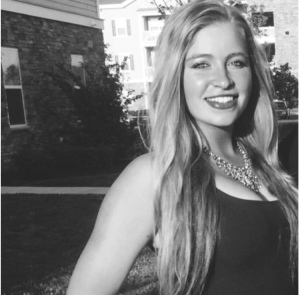 Terin Weinberg is an MFA candidate at Florida International University in Miami, Florida. She graduated from Salisbury University in Maryland with degrees in English and Environmental Studies. Her work can be found in journals including The Normal School, Flyway, Waccamaw, Barely South Review, and New Southerner.